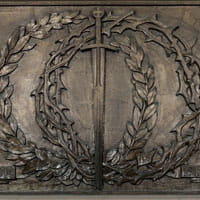 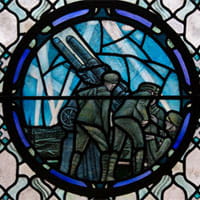 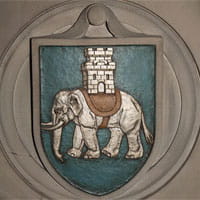 The Windows of the Shrine

The whole rich and complex iconography of the Memorial culminates in the seven windows in the Shrine. Unlike the luminous windows in the Hall of Honour, these windows are rich in colour and dense in imagery. They are also more emblematic in style, more abstract even, so that the forms of the compositions fill the whole field of each window with extraordinary decorative unity. There is no plain glass in them at all. Dominated by dark blues, shading even to purple, and by rich greens, their light is dark and solemn.

The First World War was universally thought of as "the war to end all wars". This provides the overall theme of the windows, the triumph of peace over war, which was the only ambition that could seem to make the terrible sacrifice of the First World War worthwhile. Stated so movingly in the beauty of this stained glass, this message represents the underlying purpose of the whole Memorial, the Nation's reconciliation with its grief.

Like the frieze beneath them, the iconography of the seven windows is designed so that the two on either side lead towards the apse where the central window, the climax of the scheme, stands above the Casket and the Sword of Honour. Each of the individual windows is also divided into three registers however, one above the other. The result is a scheme of extraordinary richness and complexity.