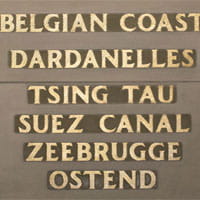 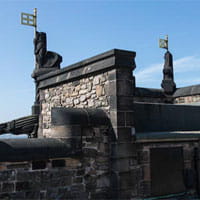 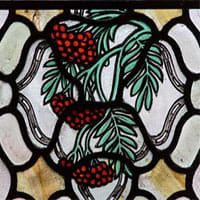 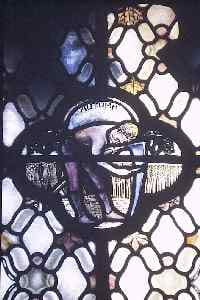 The four windows on the south wall represent the seasons, spring and summer to the east of the door. Each window is framed in a border of appropriate flowers. In the upper register is a quatrefoil medallion emblematic of the particular season, a reaper for Autumn for instance. In the centre is a large circular medallion with a scene from wartime, but in each case set at home, men boarding a troopship, or the arrival of a train carrying men on leave. This central medallion is flanked by four small vignettes of seasonal flowers and berries.

Beneath is a small half-quatrefoil vignette of the season itself and its typical weather. These are beautifully condensed pieces of design. Then in each window along the bottom register, and so at eye level on this wall, are two small quatrefoil medallions representing a scene from the war at home, characteristically too, a number of these scenes are identifiable as set in Edinburgh.

In Spring for instance, Princes Street and the Royal Scottish Academy are the setting for an air raid, in summer a hospital is set up in Charlotte Square. At one level these are a charming diversion from the solemnity of the place, but at another they are integrally part of its iconography, and so of the expression of its purpose.

The seasons are a universal statement of time, the time, too, that is needed to soften grief, but the detailed iconography of the windows also links it all to the actual historical time and place of these events. The fact that it is the Home Front and that it is set in a real place also locates the purpose of the Memorial firmly in the experience of the people of Scotland.