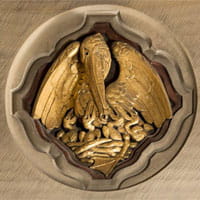 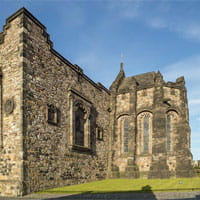 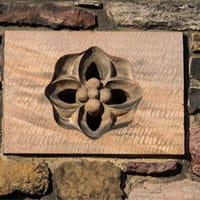 The Hall of Honour

The hall itself is transverse and so opens to your left and right. It is high and barrel-vaulted and built in a simple classical style. Tall windows of stained glass made by Douglas Strachan, responsible for all of the glass in the Memorial, cast a soft and solemn light. There are four windows in the south wall and one at either end. To give light, the windows are designed with medallions set in large areas of uncoloured glass.

The north side of the Hall of Honour is divided by columns into bays, each dedicated to a different regiment and enhanced with battle honours and consecrated colours. A frieze runs around beneath the vault with the names of battles inscribed on it in bold letters cut in relief in the stone, the background gilded. Variations on this lettering continue throughout the building.

On the broad shelf in front of each of the bays, the names of the dead are listed in leather-bound books. This immediately brings the grandeur of the architecture back to the personal. However terrible the numbers recorded here may be, they are nevertheless not anonymous statistics, but the sum of individual sacrifice and individual loss and so the visitor is not confronted with a great wall of names, but is invited to perform a private action by turning the pages of these books to find the name or names of those they have lost.

This balance of the individual and the collective is sustained throughout the Memorial and is one of the reasons for its power to move. It was built, not with public money, but with money gifted by individual Scots to achieve the collective expression of their grief.

The many artists and craftsmen worked not as competing individuals, but as a co-operating team, each contributing their best to the co-operative effort. The Memorial itself is a compound of separate monuments to individual regiments, corps, and services, here in the Hall of Honour and in the transepts to east and west, and so they too add up to a collective statement which is the sum of individual efforts.