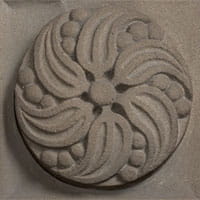 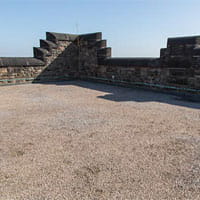 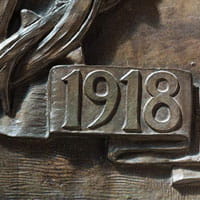 The four windows on the south wall represent the seasons, autumn and winter to the west. Each window is framed in a border of appropriate flowers.

In the centre is a large circular medallion with a scene from wartime, but in each case set at home, men boarding a troopship, or the arrival of a train carrying men on leave. This central medallion is flanked by four small vignettes of seasonal flowers and berries.

Beneath is a small half-quatrefoil vignette of the season itself and its typical weather. These are beautifully condensed pieces of design. Then in each window along the bottom register, and so at eye level on this wall, are two small quatrefoil medallions representing a scene from the war at home, characteristically too, a number of these scenes are identifiable as set in Edinburgh.