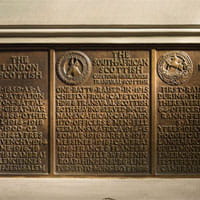 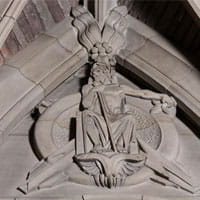 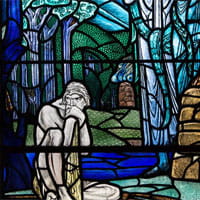 Completed in just four years between 1923 and 1927, the Scottish National War Memorial incorporates more than sixty separate works of art; stained glass windows, reliefs in stone and bronze, woodcarvings, sculpture in steel, carved inscriptions, furniture, wrought iron and much else.

The architect, Sir Robert Lorimer, brought together the team of artists and craftspeople who achieved this. As its leader, he harnessed the creativity and skill of a whole company of men and women in a huge co-operative effort. The result is an extraordinary achievement and one of the most complex and ambitious schemes of art and architecture of its time.

As an architect Lorimer subscribed to the ideals of the Arts and Crafts movement led by men like William Morris and Walter Crane, ideals that included the importance of cooperation over the search for individual expression, and above all the central importance of public art. Walter Crane wrote, "All really great works of art are public works - monumental, collective, generic - expressing the ideas of a race, a community, a united people".

The Scottish National War Memorial works at that exalted level of ambition. Thus, you cannot see the art as somehow separate from the building's function as a memorial, nor even as merely adorning it.

On the contrary, art and architecture are integrally the vehicle of that function. They articulate the meaning of this beautiful and moving place, achieve the collective expression of the nation's grief at its terrible loss, of its pride in its sons and daughters and of its determination at the end of the First World War that such a sacrifice should never again be necessary.

As you approach the Memorial these things immediately start to become apparent and as you explore it their meaning becomes even richer.