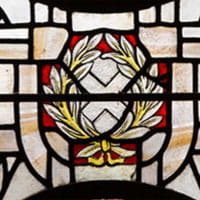 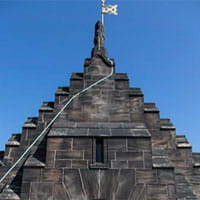 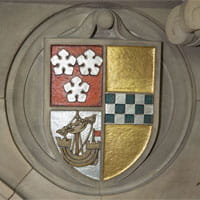 During 2013 a project was initiated to photograph and record all areas of the Scottish National War Memorial. The project continues, and on this page you have the opportunity to view a sample of the photographs taken. The gallery was expanded throughout the course of 2014 and information provided as to which artist created each piece. To view the overall content of a Gallery simply click on one of the photographs below. When inside a Gallery, clicking on individual photos will expand them to full size and include captions.

The Memorial has acted as the focal point for several high profile events over the past few years, several connected with the 100 anniversary of the First World War.

The Trustees and Staff of the Memorial were honoured by a visit on 3 July 14 of The Queen and The Duke of Edinburgh. The Queen attended the Annual Service held in the Memorial, which this year included the laying up of the Colours of The Highlanders, 4th Battalion The Royal Regiment of Scotland. After a Reception held in The Great Hall of Edinburgh Castle, The Queen opened a Memorial Garden.

Photographs of The Queen's visit can be viewed by clicking on "Royal Visit 3 July 2014" photograph below.

Overnight Thursday 30 June/Friday 1 July 2016, over 700 members of the public visited a Vigil held in the National War Memorial to commemorate the Centenary of the start of the Battle of the Somme. The Vigil was manned by 20 members of the Armed Forces and over 100 members of Service Veterans groups.

Photographs of Vigil can be viewed by clicking of the relevant thumbnail below.

The Trustees and Staff of the Memorial were honoured by a visit on in July 2016 by HRH The Princess Royal who attended the Memorial's Annual Service. The Service was made particularly poignant by the laying up of a battle ensign that had been attached to the wreck of HMS Royal Oak.

HMS Royal Oak, a World War One veteran where she had fought at the Battle of Jutland, was sunk by a German U Boat on 14 October 1939 whilst she was at anchor in Scapa Flow, Orkney. Nearly 900 sailors died and the wreck is still a war grave. Every year a new battle ensign is placed on the wreck by Royal Navy divers and the ensign placed the previous year is returned to the members of the Royal Oak Association. In 2016 the Association graciously allowed the ensign to be laid up in the Memorial. The ensign was laid up by HM's Lord-Lieutenant of Orkney Mr James William Spence and two of the divers who recovered from the wreck.

Photographs of the Annual Service can be viewed by clicking on the relevant thumbnail below.