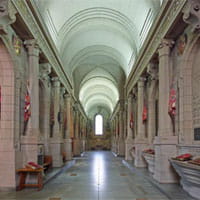 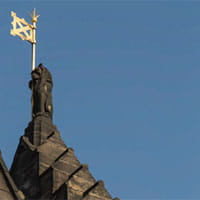 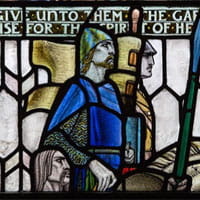 F & F stands for France and Flanders. This was the main British theatre of operations in the Great War.

2 I have a badge/button/picture of a uniform. To what regiment does it belong?

I am afraid we cannot help you here. We recommend you contact:

The Curator, The National War Museum of Scotland, The Castle, Edinburgh, EH1 2NG

3 I cannot find the name of an individual recorded in the Rolls of Honour. Why is this so?

Probably because we were not notified of his death.

4 Can I have a name added to the Rolls of Honour?

Given the length of time since the ending of both the First and Second World Wars, the Trustees hoped that there has been ample time for the immediate families of casualties to request that their names be added to, or existing entries be amended in the various Rolls of Honour. Bearing in mind that it is and was the wish of the immediate family of the casualty that was paramount; they had previously restricted such request entitlement to the immediate relations of a casualty.

Recent evidence has shown that the Rolls of Honour are neither complete nor wholly accurate: Thus, whilst the Trustees will always accept applications for additions (and amendments) directly from close relatives (father or mother, husband or wife, son or daughter, nephew, niece, grandchild etc.), the scope for submission has widened.

In each instance, the application must be accompanied by a signed statement that the applicant is the closest next of kin of the casualty, or specify the relationship to the person honoured.

The Trustees will consider a request which comes from the Regimental Headquarters of the casualty’s regiment [or current successor Regiment] or for members of the Royal Navy, the Royal Marines and the Royal Air Force, from the Officer in Charge of the relevant Records Office. In exceptional circumstances, applications from bona fide colleagues or researchers can be submitted for consideration.

Should the casualty have been killed in the armed forces of one of the former Dominions then the request should normally be made by an executive of the appropriate national ex-Serviceman’s organisation (such as the Australian Returned Servicemen’s League).

In all cases the applicant is responsible for providing full documentary proof of the casualty’s service to support the application and similar documentary proof that the serviceman or woman has been accepted as a war casualty by the Commonwealth War Graves Commission.

Documentary proof that the subject, or either natural parent, was born in Scotland is essential where the individual has not served in a Scottish Regiment. This proof should take the form of an extract from the Register of Births. In some circumstances, two consecutive census records spanning the period of the individual's birth may provide sufficient evidence for acceptance.

An application form is available from the Scottish National War Memorial Office.

Before submitting a request for an addition to the Roll of Honour, please check via the SNWM searchable database that the individual is not already included in our records. Searching by Service Number is often the most effective way to carry out this preliminary search https://www.snwm.org/roll-search/

Eligibility Criteria for inclusion in the SNWM Rolls of Honour.

Casualties are recorded in the SNWM Rolls of Honour if they were a member of the Armed Forces of the Crown or of the Merchant Navy and were a Scot, or served in a Scottish Regiment, and was killed or died as a direct result of a wound, injury or disease sustained:

In a Theatre of Operations for which a medal has been awarded; or

Furthermore, the following groups of casualties are eligible for inclusion:

Scottish civilians who died as a result of enemy action.

Dates of Conflicts. Where casualties as defined above died during or as a result of the First or Second World Wars, the qualifying dates are casualties who died between:

Deaths occurring out with the qualifying periods above will only be regarded as eligible in exceptional circumstances, if all available documentary and other evidence including Death Certificates show that death was the direct result of the wound or injury sustained, or disease contracted on active duty within the qualifying periods.

5 One of my ancestors was born in/served in/was in detention in Edinburgh Castle. Please tell me more about him.

Sorry we cannot help you here as we do not know of the existence any records of past garrisons of Edinburgh Castle.

6 When I look up an individual with a particular Army number, I find several records. Why is this?

Because originally, soldiers were issued with regimental numbers, so several soldiers in different regiments could have the same number. It was only later that army wide numbers were introduced. We do not know when the army wide system was introduced.

You may have noticed that we cannot answer some of the questions we are posed. However, we often know which organisation can help you. This next section summarises areas where we need to refer you to outside agencies:

7 Where was an individual was killed or buried?

If you wish to find out where an individual was killed or buried, we recommend that you contact the Commonwealth War Graves Commisssion (CWGC) directly at www.cwgc.org.

8 What activity was an individual involved at the time of death?

Invaluable source of information about units or individuals are Regimental War Diaries. These often record the details of individuals’ deaths.

War Diaries. War diaries can be traced, or are held at:

All queries regarding medals should be referred to:

We cannot answer generic questions about individuals’ military service. You would need access to service records, which to the best of our knowledge are held as follows:

Officers born before 1914 and Ratings enlisted before 1924:

Officers and Other Ranks enlisted after 1925:

Officers or soldiers who service ended before 1921:

Officers and soldiers whose service ended between 1921 and 1997 [less Foot Guards]:

Officers or Soldiers whose regular or reserve service ended after 1997 [less Foot Guards]:

Officers and Soldiers of the Foot Guards Regiments:

You may also find information about individuals or units through the "Scots at War Trust" website. The Trust concerns itself with native Scots, those of Scots heritage, men and women who served in Scottish or Commonwealth Scottish units and those who served in Scotland, or in Scottish waters, during the

11 Can I have a correction made to an entry in the Rolls of Honour?